With only a couple of days to spend in Cebu City on our Philippine Islands vacation, I wanted to spend a day sightseeing and taking in many of the attractions in and around the city while there. The Twin City Discovery Tour with Explore Cebu Tours & Travel was a perfect choice!

This is a full day guided tour visiting the sites and attractions of the twin cities in Cebu.

For those of you like us, that wish to see the main attractions and sites in and around the twin cities of Cebu, then this tour is ideal. Twin cities refers to Cebu City itself and Mactan Island which is connected to the mainland with a couple of bridges. Mactan Island is where Cebu’s International airport is located (Mactan-Cebu International Airport). 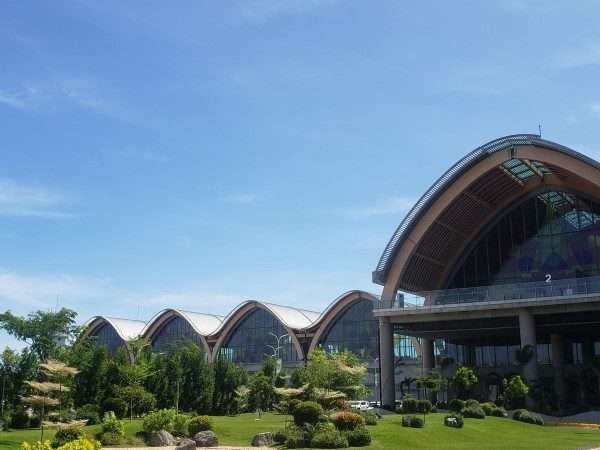 In July 2018, a brand new terminal was completed at the airport. It’s a beautiful new terminal that has been noted internationally as “the world’s friendliest airport,” located in Lapu-Lapu City on Mactan Island. We were very impressed with the design and layout of this new terminal on our recent visit.

Trust me, after spending some time in the city, traffic is a nightmare to say the least. You definitely do not want to drive yourself around or navigate in the city on your own. Taking a guided tour in a comfortable air conditioned vehicle is the only way!

By taking this tour, your guide and driver will pick you up and drop you off at your hotel or at the airport at a designated pre-arranged time. 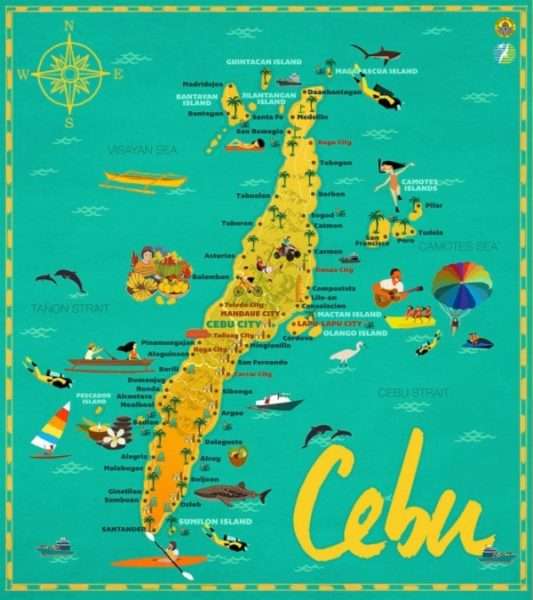 Below, I’ve listed some of the main highlights that are included in this Discovery Tour, along with a brief description of what’s included in your tour package. I do recommend including lunch on your tour, as it is a long tour and the buffet lunch included was quite nice.

Normal pickup time at your hotel for this tour is at 8 am. This is not a big bus tour which is great and something that I have never enjoyed. These are private or small group tours that are catered to you specifically and definitely worth paying the little bit extra for you. In many cases, the difference you pay is very negligible.

The Heritage of Cebu Monument 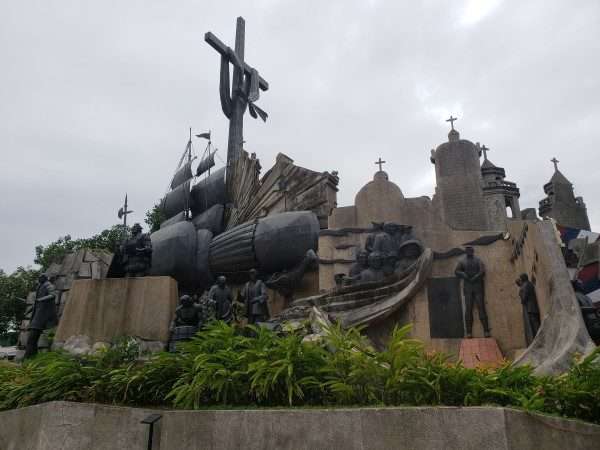 The Heritage of Cebu Monument is a scene of sculptures constructed of concrete, bronze, brass and steel depicting events and forms depicting the history of Cebu. The construction of this remembrance collaboration started in 1997 and it was completed in 2000.

This enormous monument was built right over the original site of Plaza Parian, the heart of old town in Cebu City. The Parian is said to be where wealthy Chinese merchants of years gone by lived and held their lavish events. A few of their homes still remain, including the Yap-Sandiego Ancestral House listed below and worth visiting.

Eduardo Castrillo who is a local artist, constructed this beautiful work of art now on display in the city. Learn more about this heritage monument and its meaning in the website listed below. 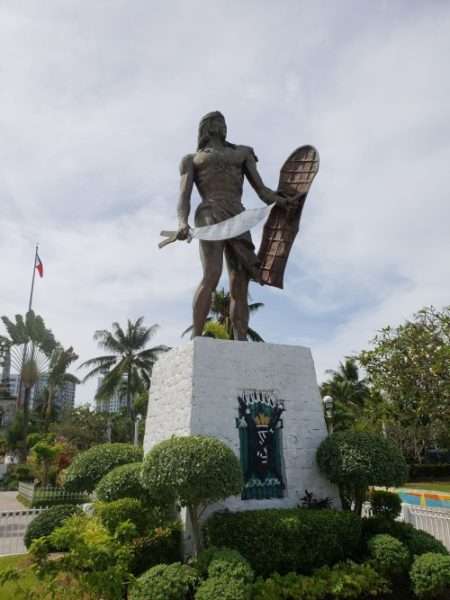 The Lapu-Lapu statue is a huge 20 metre bronze statue in Punta Engaño, Lapu-Lapu City, Cebu. It was constructed and placed in honor of Lapu-Lapu himself. He was a native leader who defeated the Spanish soldiers led by the famous Portuguese explorer Ferdinand Magellan in the historic 1521 Battle of Mactan.

The Lapu-Lapu memorial statue sits on top of a pedestal showing the Cebuano hero in his native costume carrying a sword on his right hand and a shield on his left. 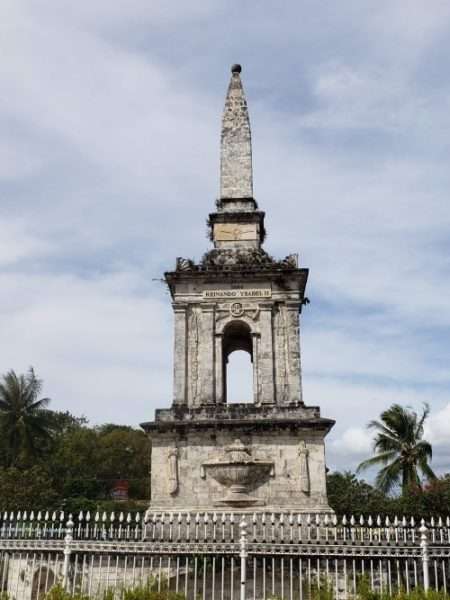 The Magellan shrine is a large memorial tower built in 1866 which honors Portuguese explorer Ferdinand Magellan. The shrine is built in the proximity of where Magellan is believed to have been killed in 1521. 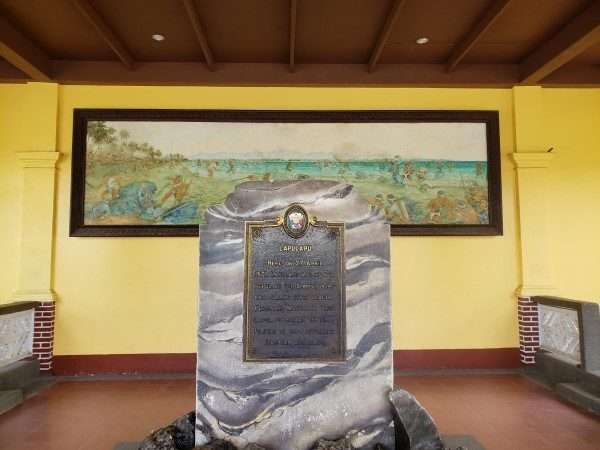 There is also a covered structure in the park with a large painting on the wall depicting the Battle of Mactan. In front of the painting you will see a commemorative marker which reads … 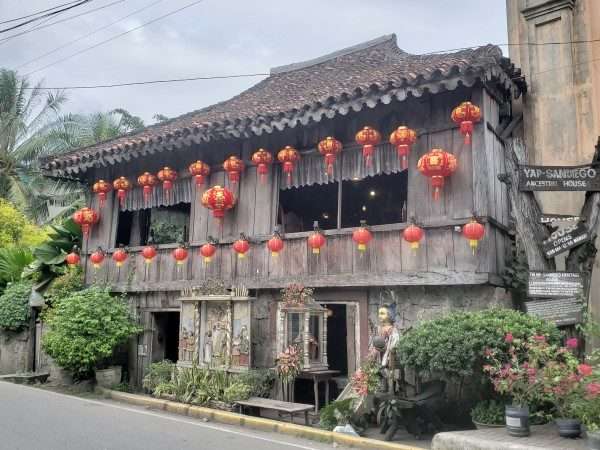 This amazing Ancestral House dates way back to the Spanish colonial era of the 1600’s. The Yap Sandiego Ancestral House is now an official museum that depicts the original Chinese settlements that were once present in Cebu. 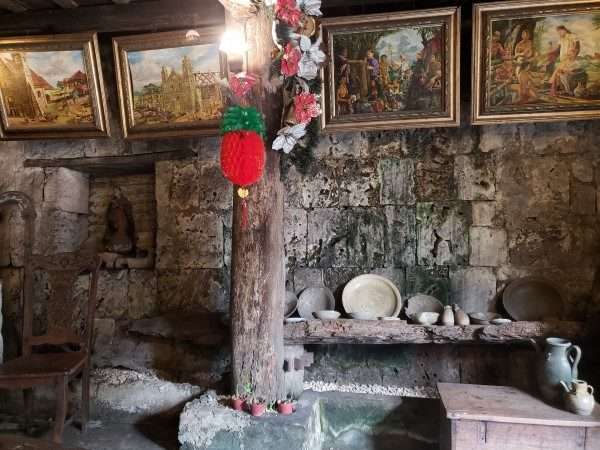 This heritage home is said to be the oldest Chinese house still standing outside of China itself. Inside this museum, you will find beautiful hand-carved furniture, artwork and a small garden outside. 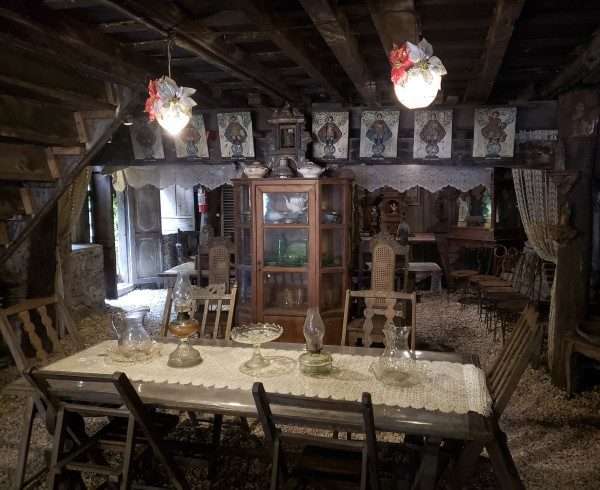 Locals call the home by the name of … “Balay nga Bato ug Kahoy.” The house was constructed with coral stones and wood and was originally owned by a Chinese merchant named Don Juan Yap where he lived with his wife, Doña Maria Florido. 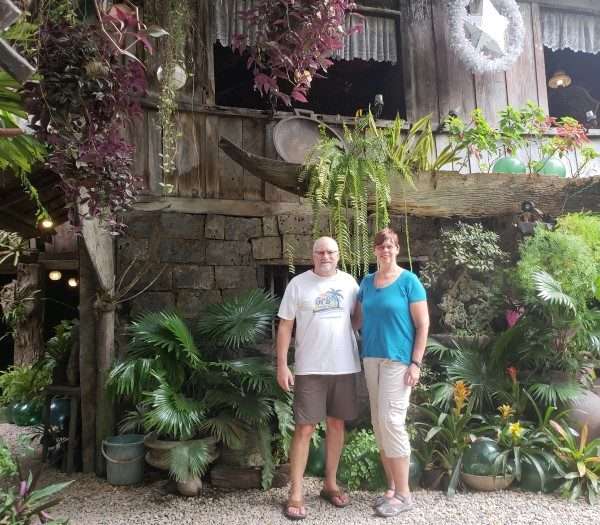 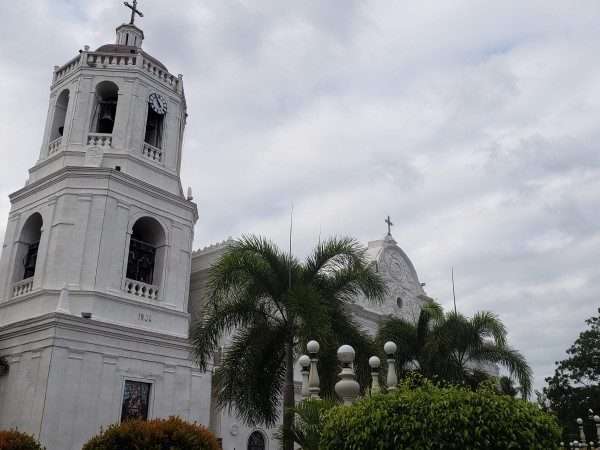 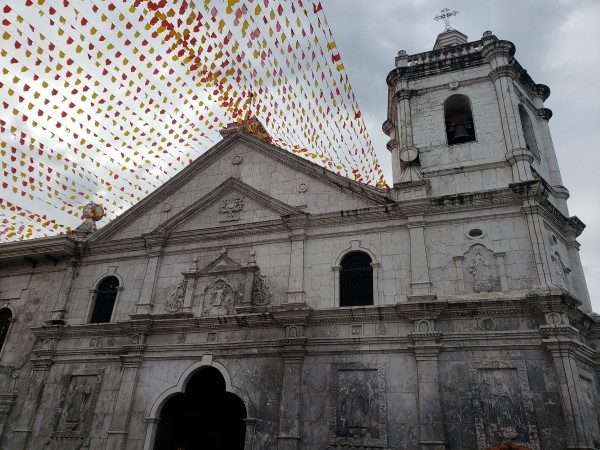 Inside, you will find the most famous religious icon in the Philippines. The statue of the Santo Nino. This remarkable statue was given to Queen Juana of Cebu by Magellan himself. 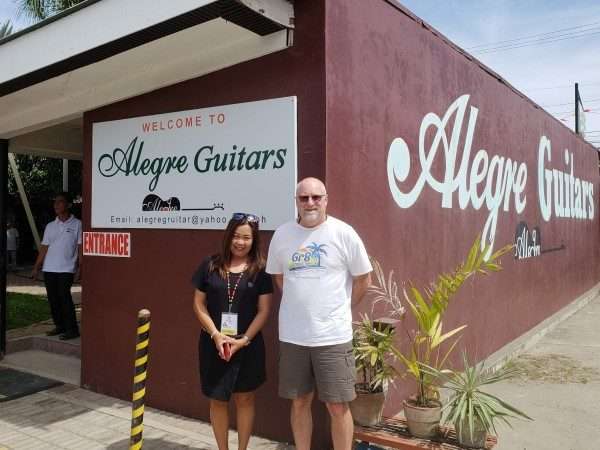 The Alegre family is one of the pioneers in the guitar-manufacturing business and in their third generation of business in Cebu. The families exceptional quality guitars are made of indigenous materials from around the globe.

Along with imported woods used to make their guitars, they also make use of indigenous woods and shells with Philippine Mahogany, which is said to be one of their favorites. 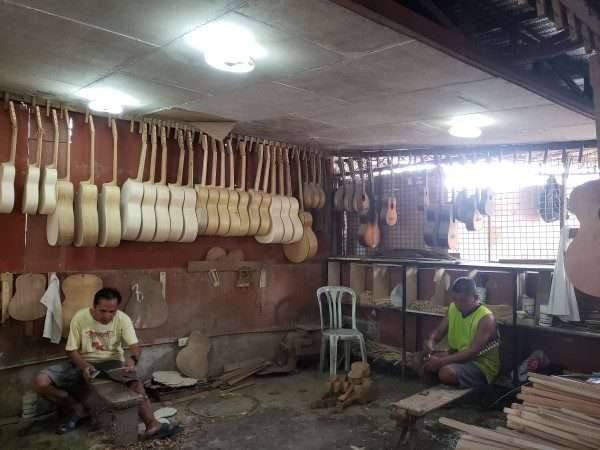 Their world renowned guitars are exported to numerous countries around the world including; Canada, Australia, Japan, and the United States. Visitors and prospective buyers, who are interested in the different stages of guitar-making, can take a look at the workshop to witness the craftsmen do the actual guitar-making process. 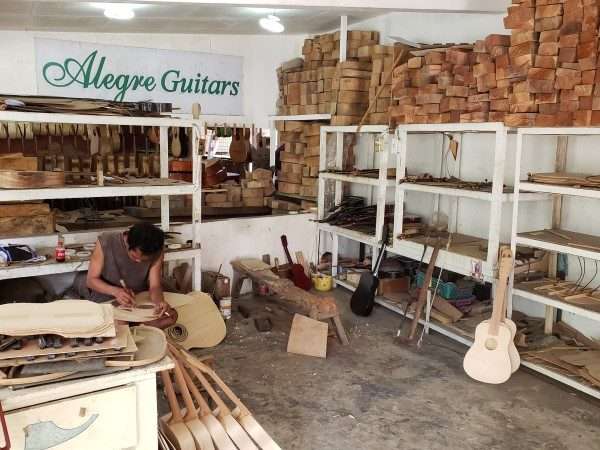 Alegre Guitar Factory is located on Mactan Island, in the neighborhood of Abuno in Lapu Lapu City. There are many guitar factories and stores here in Mactan. 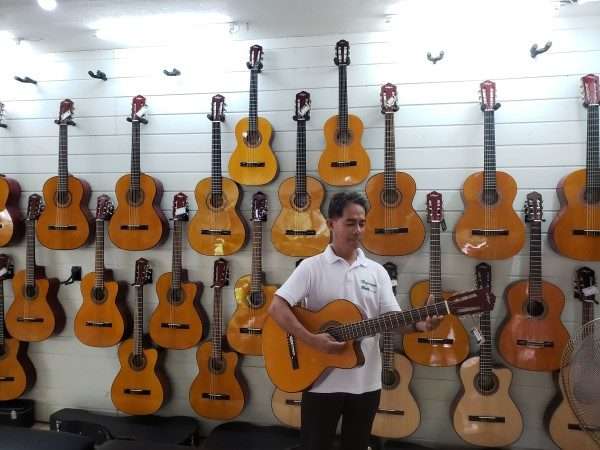 Definitely interesting to see craftsmen at work making these fine guitars by hand. Afterwards, it was amazing to see the finished products and demonstration of these beautifully crafted instruments. 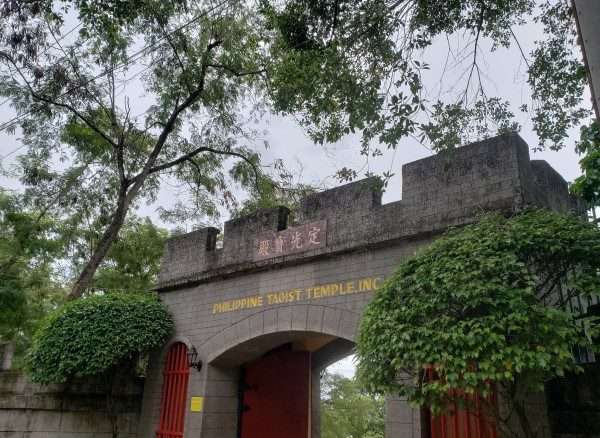 The Cebu Taoist Temple is a Taoist temple located in the upscale Beverly Hills Subdivision of Cebu City. Yes, you heard that right, this area is referred to as Beverly Hills like that of the posh district in Los Angeles, California! This beautiful temple was constructed by Cebu’s substantial Chinese community back in 1972. 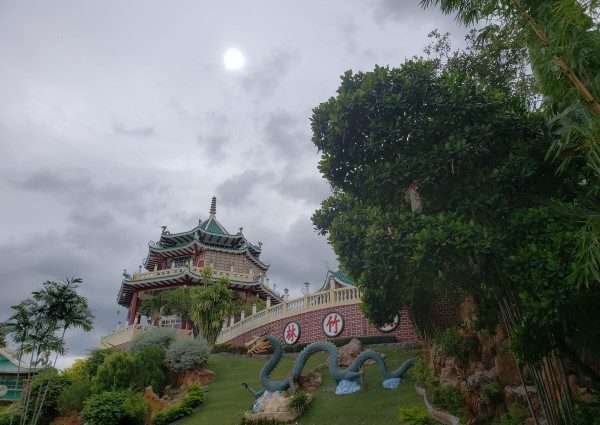 The Taoist temple is a shrine for those who are practicing the Taoism religion, which is based on the teachings of Lao Tze, a Chinese philosopher. 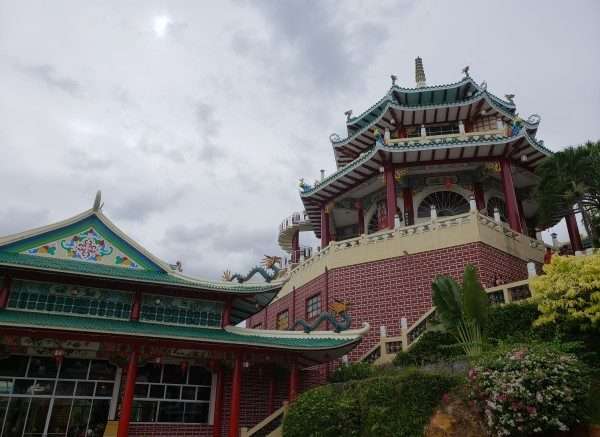 Located on the grounds include a smaller depicted version of the Great Wall of China and a large dragon statue as you make your way to the entrance. The temple is beautiful, situated high on the hillside with a commanding view of Cebu City and the ocean beyond.

The view is worth the visit alone! 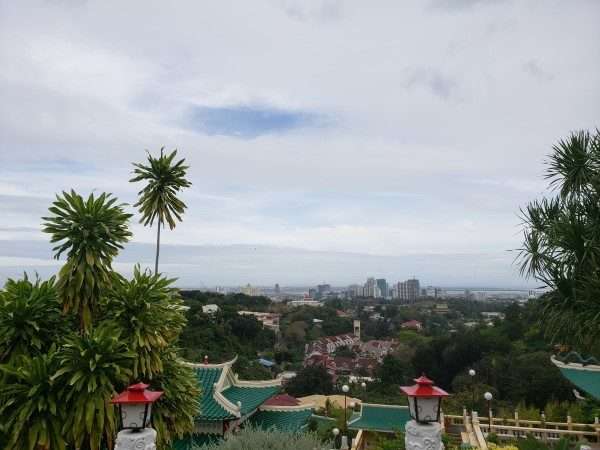 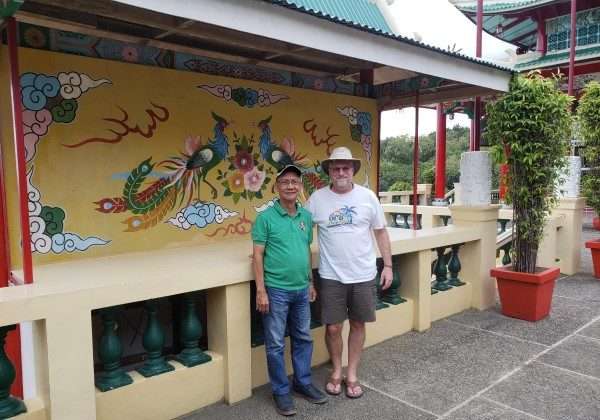 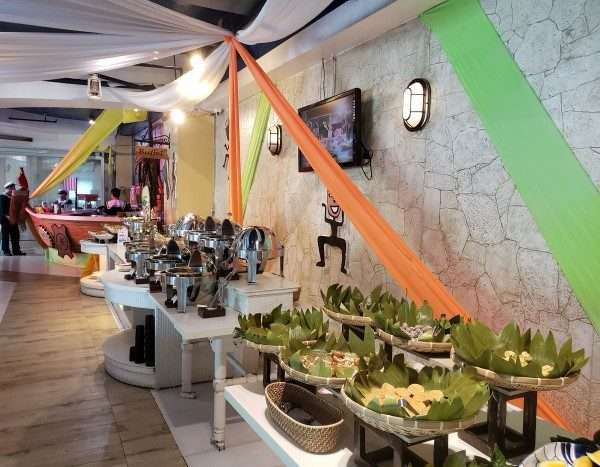 The tour also includes a nice break and stop for a pleasant buffet lunch along the way. All in all, a wonderful tour and great way to see the sites of the twin cities.

Explore Cebu Tours & Travel is a trusted & fully licensed travel agency with more than 20 years of experience in the travel industry. They offer efficient and professional services and are committed to Quality Service always.

Our guide and driver were superb and I highly recommend their service for all your travel needs in the city and elsewhere. Below, I have listed their official website link where you can access much more detailed information on the tours they offer, booking and more.

Although our tour was in collaboration with Explore Cebu Tours & Travel, rest assured all content and opinions are that of the author and reflect my personal experience only.

✈   Holiday In The Philippines – Travel Planner

How Waiting to #GoLater Can Actually Boost Your Mood, According to Experts

The coastal village of Anilao in Mabini, Batangas is the birthplace of…