The Spanish capital city of Madrid is perfect for a city break or as a base to explore many of the wonderful towns and villages nearby. Whether you’re interested in checking out the famous artworks and baroque pieces you don’t even understand at the Museo del Prado, going about official business, or tasting first-hand what all the fuss around Calamari sandwiches is about, Madrid definitely has its charms.

If arriving in Madrid by air, you will almost certainly be landing at Madrid’s Barajas Airport and the good news is getting from Madrid Airport to the city centre is a breeze.

The frustration of where you are and not fully understanding where you’re going is real. There is also the fear of being ripped off and that you might end up paying five times more than you should for travelling to the city centre from the airport.

Bet fear not, this is why I have prepared this post for you – a complete transport guide for your first time in Madrid. As a Madrid resident and a regular traveller, I have come to know the airport in Madrid very well and pretty much every method of getting there.

Read on to see the best options for getting to the city from the airport in detail. 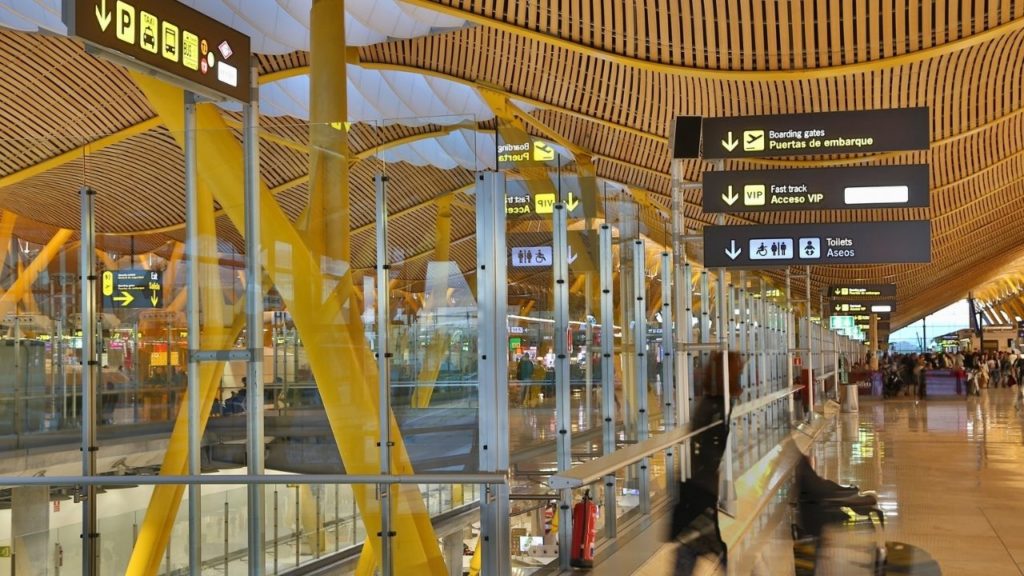 Madrid Barajas Airport has 4 terminals spread over two separate hubs. Terminals 1, 2 and 3 are all next to each other and can be walked between. It takes about 15 mins to walk from the far end of terminal 1 to the opposite end of terminal 3.

Terminal 4 is in a completely different building and you would need to use the free, inter-terminal bus if you need to move between the different hubs.

How to get from Madrid airport to the city centre

Madrid airport is just around 10 kms from the city centre, so the ride from Madrid Airport to the City Centre is usually a short one. The options you have include taxis, metro, train, bus and private transfers.

While a taxi or private transfer would always be the best choice for convenience, if you are looking to save a bit of money the Metro or Train would be a better choice depending on what terminal you arrive into. If you are landing in terminal 1, 2 or 3, then I would recommend the Metro. If terminal 4 then the train is more convenient. Each costs about €5 and I have more details below.

The last option is the bus. And while the trip ticket is priced at €5, most people would want a faster alternative than a means of transportation that took one hour for such a short journey. Here’s a lowdown of what each option offers. 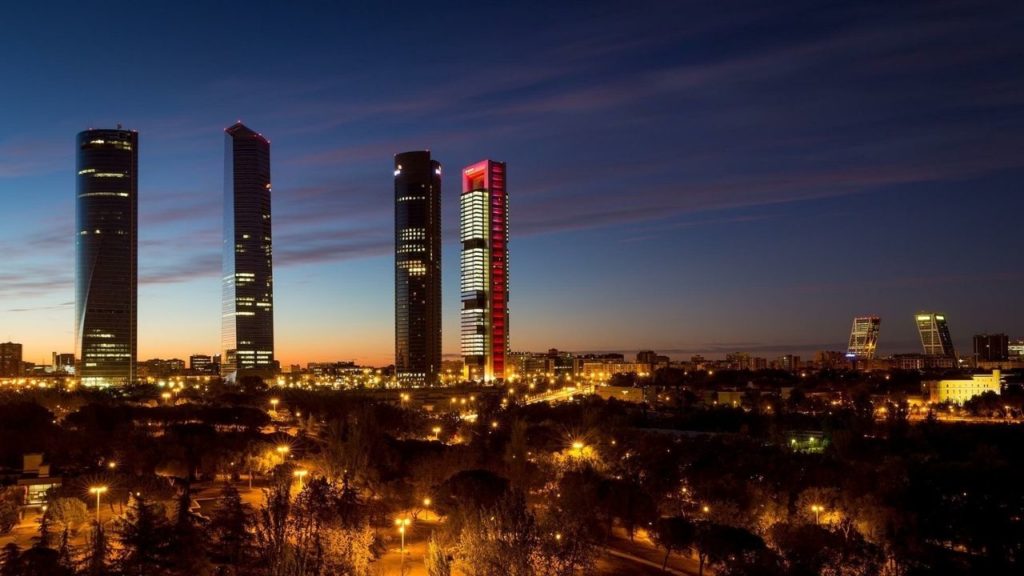 Taxis from Madrid airport to the city centre

Madrid airport to city centre by taxi has a €30 flat charge. Any other destination that falls outside of the city centre (designated as being inside the M30 Madrid’s inner ring road) will be charged based on the readings on the taximeter.

If you are on the meter, you do not need to be concerned, Madrid taxi drivers are well regulated and ceratily trustworthy.

The airport always has plenty of taxis available arranged in ranks outside the four terminals. There are also dispatchers there to make sure that boarding the taxis is orderly and quick and that no one jumps the queue. Not that I have ever seen a large line for taxis.

Madrid taxis are painted white with red stripes that run across the cab diagonally. They also run all day and night, so you won’t ever get stranded if your heart is set on using that form of public transport.

As I mentioned above, the journey should take between 25-30 minutes without traffic. However, the route from the airport to Madrid city centre is one of the busiest roads in the city as three major highways all roll into one.

If you are travelling in the rush hour, roughly between 7am – 10am or 5pm- 8pm, you can expect to add an additional 20 minutes to that time.

It’s not so bad when travelling the other way, from the city to the airport, but if you have a flight to catch, do bear this in mind and leave plenty of spare time. 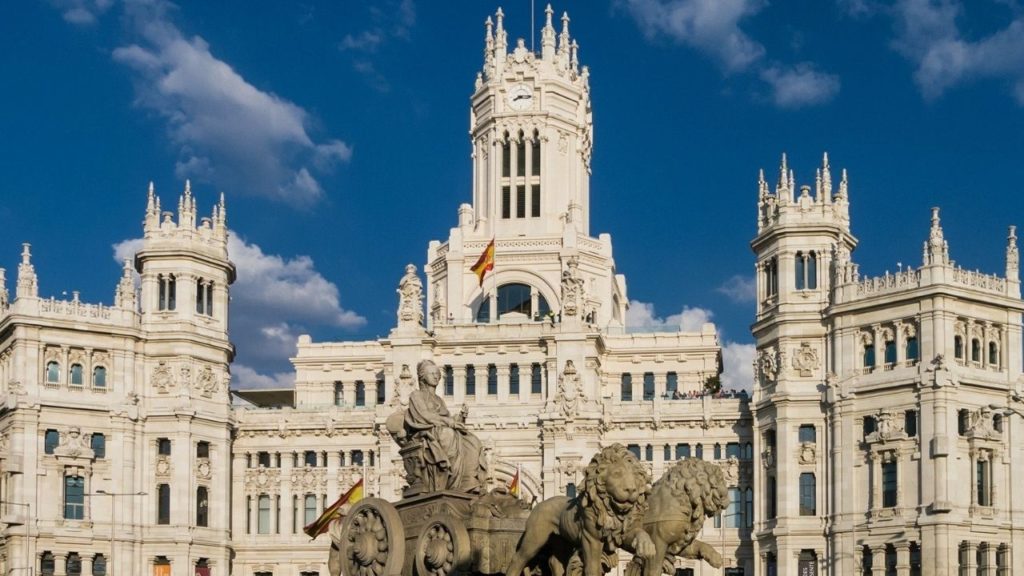 If you don’t have  much baggage, then the metro is a very cheap option and probably the best choice if you are arriving into terminals 1, 2 or 3.

The Madrid Metro costs €5 for a ticket that’ll take you directly to the Nuevos Ministerios, in the city centre, within 22 minutes. Unfortunately, it’s not the most connected station, so you will likely have to hop onto the grey line (number 6) towards Moncloa where you can pick up line 1 (Blue) or line 2 (Red) which will be the ones that can get you to most places in the city.

The fee includes a €2 supplement charge on a standard €3 fare.

Preview(opens in a new tab)

There are multiple ticket machines on both sides of the gates to make this as easy as possible, but there will still usually be lines. 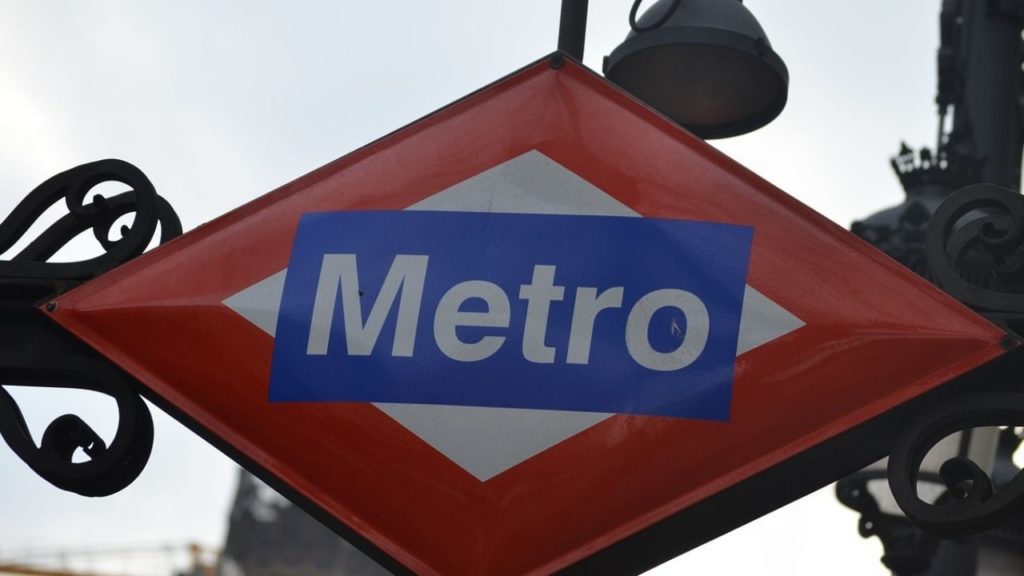 What I would recommend is paying the surcharge before you get on the train. If you are boarding the Metro heading to the airport, then just stop at a machine and buy the airport supplement. This will mean you’ll avoid the backlog of confused tourists wondering why their Metro ticket won’t open the gate.

There are two metro stations located close to terminals 2 and 4 that are easy to find. If you’re arriving through the other two terminals, there’s a free airport bus you can ride to those other terminals. But, you won’t need it. Terminal two is in between 1 and 3 so easily walkable from both.

Here is a Metro map to help you work out where you’re going As you can see, the airport is on line

Train from Madrid airport to the city centre

I would highly recommend the train as the best way to get from Madrid airport to the city centre if you are arriving in terminal 4 and don’t want to spend the money on a Madrid airport taxi.

The local train takes off from the station close to terminal 4 of the Madrid Barajas airport. It makes five stops at the main station of Madrid, Atocha train station, Chamartín, Nuevos Ministerios, Méndez Álvaro, and Príncipe Pío, and from here you can get pretty much anywhere in the city and are within reach of most of the main hotels in Madrid. 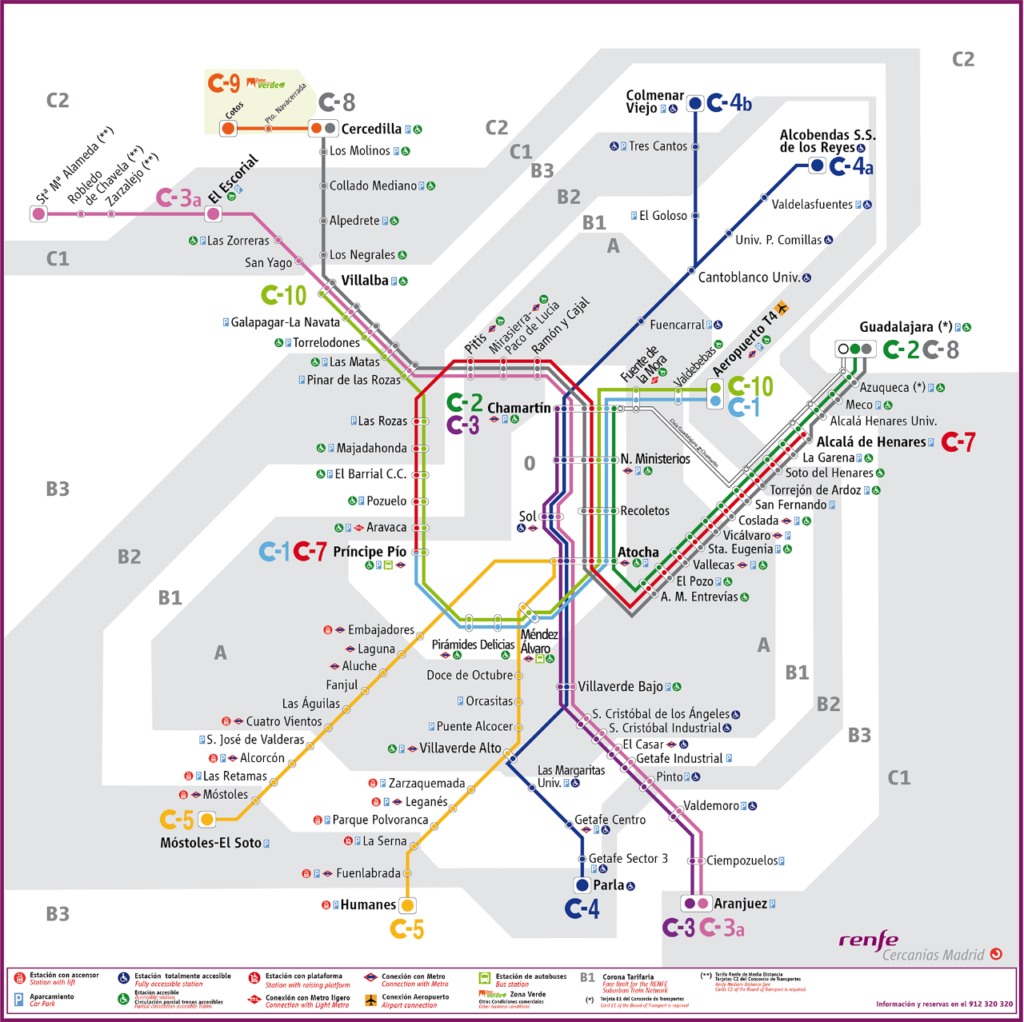 The trip from Madrid Airport to the City Centre usually takes about 27 minutes, with trains moving out every 8 minutes during the day, and every 15 minutes at night and early every morning.

You must know that getting to the station, however, is just the first phase of what is sure to be an inconvenient experience. You’ll need to get a shuttle that’ll take you to the station from the air hub, and that’s easier said than done. The shuttles can be quite busy, and lugging around many bags can prove to be quite the hassle as it is quite a lot of escalators involved.

When you get through that hell, keep an eye out for pickpockets leering at your possessions. The downside of public transport is that the convenience and security of the option are sacrificed to get you a ticket price as low as €2.6. That trade-off might not be worth it sometimes.

Bus from Madrid airport to the city centre

Leaving the Madrid Barajas Airport towards the city centre by the Madrid Airport Express bus is just €5, and available throughout the year. You can buy the ticket on the bus but remember to carry cash, as that’s the only acceptable means for bus ticket purchase.

The only terminal that doesn’t have a bus stop is terminal 3. From the other three terminals, the bus makes three stops: at Plaza de Cibeles, O’Donnell’s, and Atocha railway stations during the day, but only at O’Donnell and the Plaza de Cibeles at night. 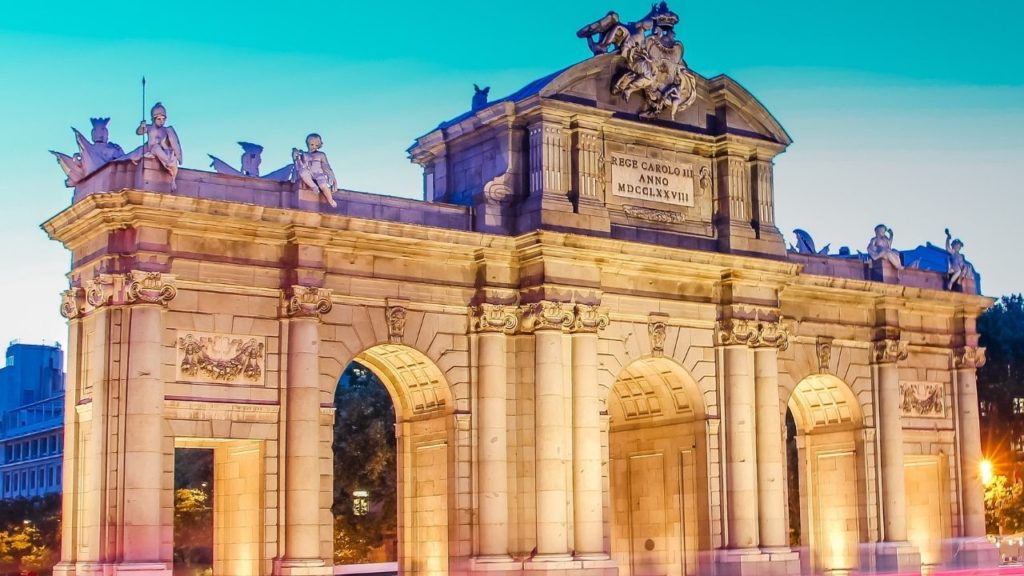 Private transfers from Madrid airport to the city centre

The most convenient transportation option, by a mile, is airport transfers. Many transfer services are available online, so you just need to book a transfer on their websites before you get off the plane and voila, a driver will be waiting for you at the terminal with a nameplate.

The drivers are always professional, friendly, and the transfer companies might match you up with a driver that’s fluent in your native language. This way, they can show you around the hotspots in Madrid.

Most transfer services will monitor your flight, so they know which time you alight from the plane and prepare your reception, so you don’t waste a second. Other transfer services also allow you to choose the type of air-conditioned car (or bus) you’ll prefer to be transported in.

The prices will be different (and not as cheap as the train tickets). But there’s no price on convenience, so the cost of at least €35 will be a little dent in your purse if you value your time, comfort, and security.

The trip using private transfers are also the fastest since you don’t spend any time looking out for a shuttle or bus to stop while carrying your luggage around. Once you get to the airport terminal, the driver will be waiting to get you to the door of your accommodation at the city centre in as little as 19 minutes. 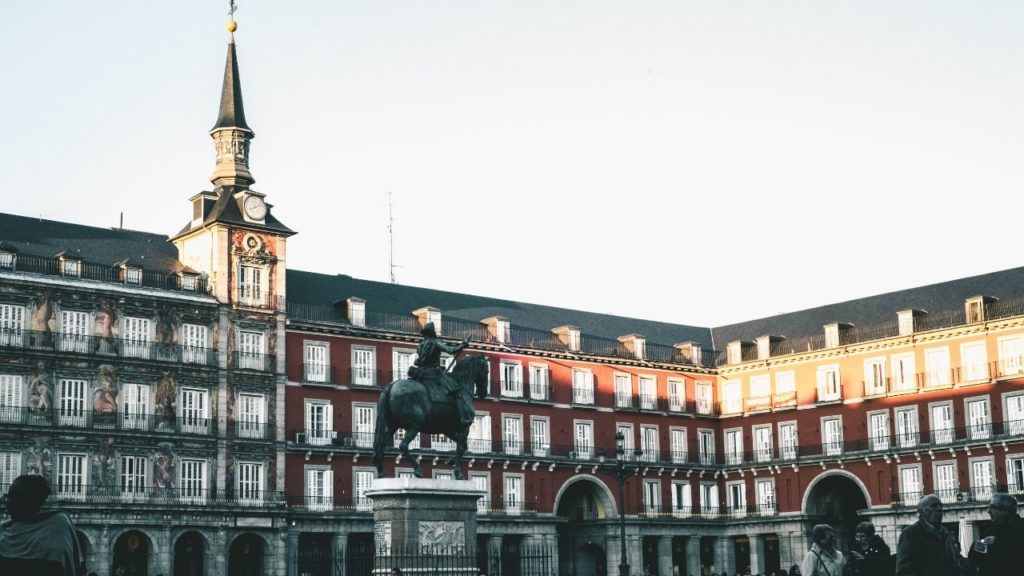 Is Uber available at Madrid airport?

Yes. Madrid is one of the only places in Spain in Madrid that have Uber (it’s not even in Barcelona).  The Uber driver will usually pick you up at the parking lot of each terminal.

How much is a Madrid airport taxi to the city centre?

The taxis from the Barajas Airport to the City Centre are available at a flat rate of €30. Compared to other cities with the same flat rates, there’s no extra tariff added to the flat rates even on weekends.

Is tipping a taxi driver necessary in Spain?

That choice is entirely up to you. It’s not common but It’s cool if you can. Usually the tip would just be the loose change from the fare, and there’s no need to do more than 10% of the trip cost.

How do the Madrid taxis look?

Madrid taxis white with a red diagonal stripe. If you need a large vehicle, put in a word with the taxi dispatcher to get a larger car for you.

Can you leave the airport during a layover in Madrid?

Yes. The airport provides some entertainment options like bars, lounges, and cafes for stranded travelers during their Madrid layover, but not as much as other major international airports. If you feel the need to make the most of your time in the Spanish capital, I would recommend leaving 1 hour to get back to the airport from the city centre to be safe. You can leave luggage for short term in lockers at terminal 1, 2 and 4. Also, be sure to just double check with your airline as you may need to check in with your flight again so you can pass through security on the way back.

How long does it take to get from Madrid city Centre to the airport?

Many factors determine how long it’ll take to travel from the airport to the city centre. Your transportation option is the first and most important factor. Buses take as much as one hour, while private transfers can take as little as just 19 minutes. Traffic might also play a part, but the deviations are never too much from the expected times.

There’s no doubt that the fastest and most convenient option for transportation from the airport to the city centre is to book a transfer. Entering a taxi comes a close second, but there’s no telling what you’ll experience with that option.

If you’re more conscious about your budget, then the train can be a great choice from terminal 4, but as there is no train station in terminals 1, 2 and 3, I would go with the Metro.